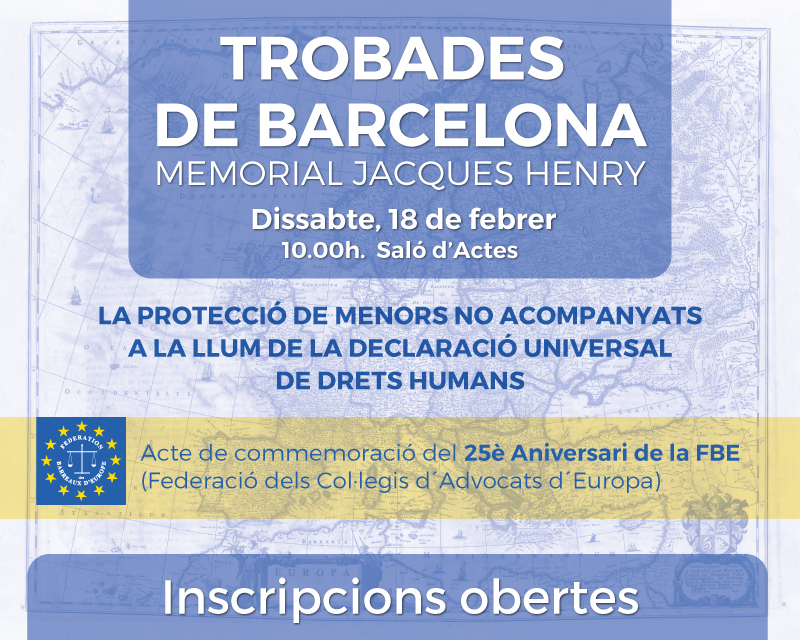 Next year, the Barcelona Bar Association will be celebrating the Festivity of Sant Raimon de Penyafort.

The traditional working session “Trobades de Barcelona, Memorial Jacques Henry” and the solemn commemoration of the 25th anniversary of the FBE will be held during the morning of Saturday, February 18th 2017.

For this occasion, we have chosen the following topic: “The unaccompanied minors and the Declaration of Universal Human Rights”.

As usual, we will have two panels. The first panel will focus on the protection and promotion of the rights of children (minor abduction, adoption, exploitation, and maltreatment). The second will be dedicated specifically to the asylum and rights of minor refugees.

At the same time, we will be commemorating the 25th anniversary of the European Bars Federation, which was constituted in Barcelona on May 3rd, 1992 as the successor to the Conférence des Grands Barreaux d’Europe.

The FBE is composed of 225 bars of countries belonging to the Council of Europe, representing approximately 800,000 lawyers.

We use cookies own and analytics to improve your user experience. If you continue browsing, we consider that you accept their use. More info